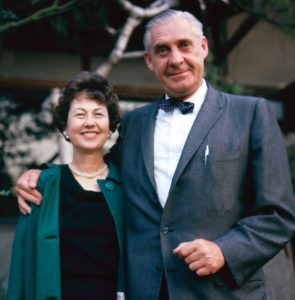 Douglas Buck was born in 1905 in Mexico where his father was a mining engineer. When the family returned to the US, they moved frequently across the west from mine to mine, until they moved to Denver so the children could attend high school. In 1929 Doug graduated from the University of Colorado in Boulder, where he met Mims.

Mildred Meyer Buck (Mims) was born in Denver, attended East High School and married Doug in 1929 when he was working with a stock broker. After the financial collapse Mims worked as a secretary in retail and then for the Better Business Bureau, while Doug joined his father-in-law in the mortuary business and later started the Capitol Cooperative Insurance Company. Doug and Mims spent several winter months each year after 1984 in Hana, East Maui, Hawai’i.

Based on the progressive values of the family, the Buck Foundation works to assist those most in need and works closely with the community to build a just world.